Jehanne McCullough, a University of Virginia School of Law student who is deaf, recently argued a federal excessive force appeal through the school’s appellate clinic, and three American Sign Language interpreters were also involved in the process.

McCullough, a 3L, signed oral arguments, which one interpreter, Kate O’Regan, spoke to the court. Another interpreter, Rene DeVito, signed what was said by the court, opposing counsel and McCullough’s co-counsel Nina Oat, another 3L at the law school who handled the rebuttal. A third interpreter, Jen Diggans, interpreted during case preparation.

“I normally use one interpreter at a time in other contexts, but oral argument is much more fast-paced than other settings,” McCullough told the ABA Journal in an email. She added that because judges often interrupt during oral arguments, she decided to use two interpreters as a way to cut down on distractions. 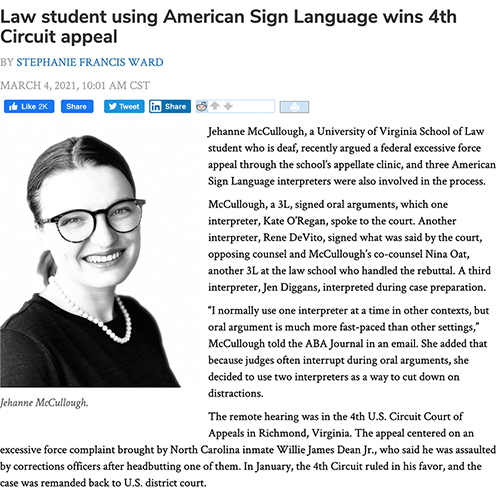