Raymond Antrobus: ‘Deafness is an experience, not a trauma’ | the Guardian

The award-winning poet has written his first picture book, Can Bears Ski?, after being unable to find any children’s titles with a deaf protagonist

There’s a story that Raymond Antrobus often tells, from the time before his deafness was diagnosed when he was six: when his father read him a picture book, Antrobus would nestle into his father’s chest, and feel the story he could not hear through the vibrations of his body. The book was often his favourite, Happy Birthday Moon; both the memory and the book would, decades later, give him the name of a poem in his prize-winning debut The Perseverance. “I’d like to be the Moon, the bear, even the rain. / Dad makes the Moon say something new every night / and we hear each other, really hear each other. / As Dad reads aloud, I follow his finger across the page.” 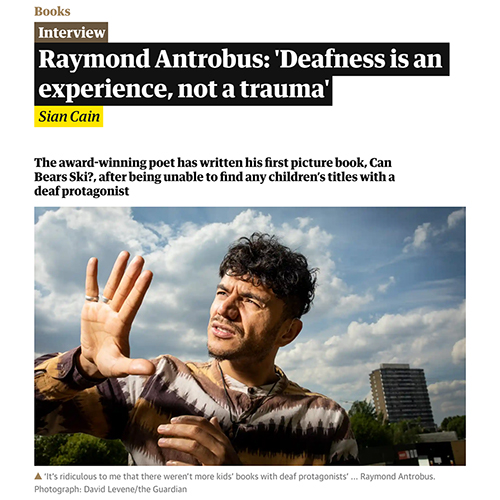