In a scrubby patch of forest near Halifax, Saint Mary’s University professor Linda Campbell and her master’s student, Michael Smith, squelch through mud, looking for lichens. The lichens they’re after can be used as natural biological monitors of pollutants from former gold-mining sites, like this one.

Smith lifts one piece from a branch. It’s usnea, or beard lichen, which the researchers can use to assess levels of arsenic and mercury in the air. That’s because it absorbs nutrients — and pollutants, if they’re present — from the atmosphere rather than through roots.

Campbell notes that there were once industrial devices used to crush gold-bearing ore at the site where this lichen is now growing. The lichen is absorbing mercury initially released from the ore many years ago, that is still percolating out into the environment. “What took place 100 years ago is still being reflected in the lichen,” she said.

Campbell is a freshwater ecologist — one of a handful of experts in Canada who’s studied how contaminants move through ecosystems, and how to deal with them.

But she’s also part of another minority. Campbell is Deaf, and uses American Sign Language, or ASL, making her part of a group that continues to be underrepresented in science.

WATCH | ASL interpretation of Quirks & Quarks’ Deaf in science: Beyond the range of hearing documentary: 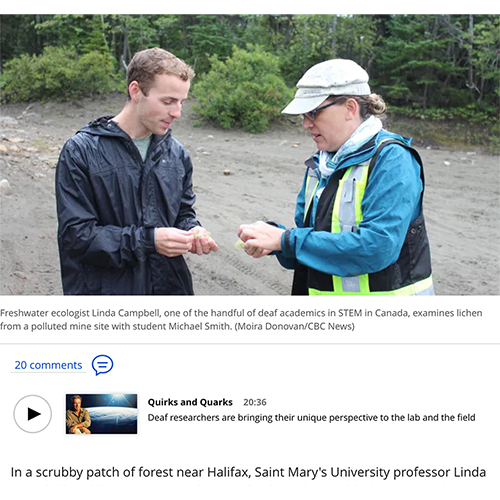 Strictly Come Dancing: Deafness ‘not a barrier’ to the arts

Historic Season Ends In Heartbreak For California School For The Deaf – Riverside...
Scroll to top