The California School for the Deaf – Riverside high school football season ended in unfamiliar territory for the Cubs on Saturday evening, as they lost their first game of the season, 74-22.

Despite the loss, both the coaching staff and players wanted to reassure their newfound fans that this season overall was a victory for not only CSDR, but for the deaf community worldwide.

The school found themselves as the subject of headlines around the United States on the back of an unprecedented season, earning a berth in the Championship game for the first time in their 68-year history as a school.

The team gained such popularity over recent weeks, that the California Interscholastic Federation (CIF) was forced to move the game from CSDR to John W. North High School to fit the ever-growing crowds.

Junior tight end and defensive lineman Christian Jimenez wanted to remind people that there’s more to the Cubs than just wins and losses:

“I just appreciate all of your support, thank you for believing in us. We hope you realize that we can play, as deaf people we can do anything except hear. Keep an open mind. Don’t look at us as disabled people. We can play football… we can play the game.”

Read more and watch the video: 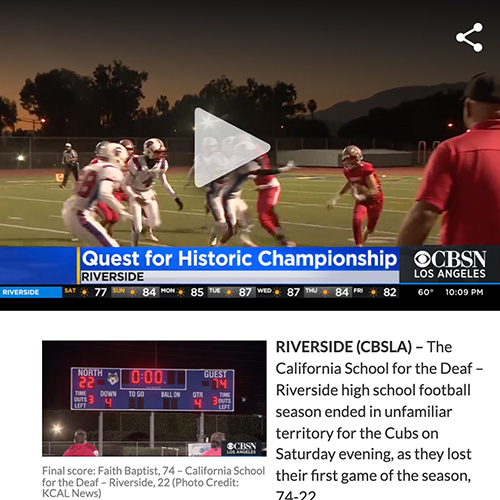 Deaf researchers are advancing the field of science — but barriers still hold...

The impact of ‘Eternals’ on Western New York’s deaf community...
Scroll to top