When DreamWorks Animation’s new series “Madagascar: A Little Wild” debuted on Hulu and Peacock in September 2020, it introduced kids to a deaf chimp named Dave, who communicates through American Sign Language (ASL), as well as his sister, Pickles, who translates for him and can also sign in ASL.

Now the show, a prequel to the 2005 film featuring younger versions of Central Park Zoo characters Alex the Lion, Marty the Zebra, Gloria the Hippo and Melman the Giraffe — is taking new strides toward inclusiveness with a guest appearance from deaf actress Shaylee Mansfield.

In an episode in the sixth season, which drops in full on Hulu and Peacock on Jan. 13, a little girl named and modeled after Mansfield trades cards with Dave at the zoo. She was animated by using a video reference of her performing the role. In what is possibly a first for deaf performers, she is credited alongside the “audible” voice actors for her “sign over” performance in the episode “‘Gloria’s Got ‘Em All.” 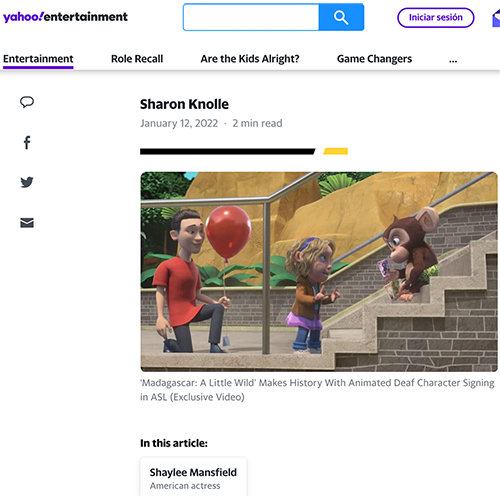 FAQ on Deaf Culture! | The ASL App
Scroll to top