Considering the world is entering into its third year amidst a pandemic, it’s hard to recall what life was like before it. At this point, 2019 feels like ancient history. It might as well have happened during the Jurassic period, when dinosaurs roamed the earth.

As a tech journalist who’s covered Apple at close range for years, I remember 2019 for the star-studded event the company held in March at Apple Park to announce, amongst other things, the hotly-anticipated Apple TV+ streaming service. The glitzy event was the closest I’ve ever come to covering a red carpet show, only nobody wore their fanciest designer clothing. It was quite something to sit in the audience and watch Apple parade A-lister after A-lister onstage to hype up their new project: Oprah, Steven Spielberg, Jennifer Aniston, Jason Momoa—even Big Bird was there. Afterwards, as I was milling around the press area in the Steve Jobs Theater with Apple PR folks and fellow reporters, I distinctly remember being alerted at one point that JJ Abrams was standing twenty feet away. He was surrounded by other people, but to this day, it’s kinda cool to think I once was in close proximity of a celebrity.

When TV+ launched that November, it debuted with shows like The Morning Show, See, Dickinson, For All Mankind, and more. And the roster has grown considerably since. One of its newest titles is the animated series El Deafo, which premiered on January 7. It shows the journey of a young girl named Cece who loses a substantial amount of her hearing following an infection. In its press release announcing the show, Apple described Cece as “[learning] to embrace what makes her extraordinary.” 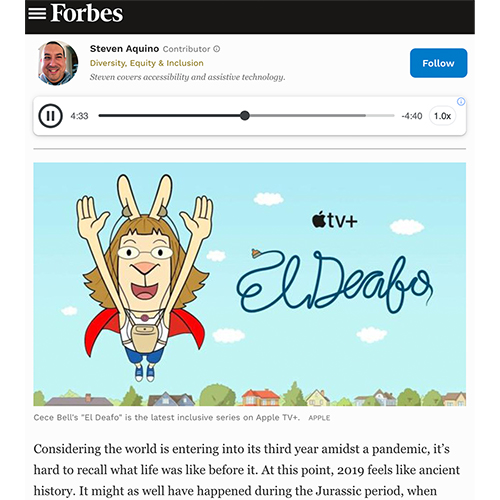