As a deaf person, I always anticipated seeing the national anthem and “America the Beautiful” performed by professional deaf entertainers who use American Sign Language.

This time, we saw an influx in news publications leading up to the Super Bowl event to see the Deaf performers on television. I’m letting out a sigh of relief, “Finally! It’s about time that we are starting to see the inclusion of Deaf people on the screen for millions of people who have hearing loss to be able to have access.”

It ended up becoming a significant disappointment for the deaf community as the ASL performers were excluded from the halftime performances and cast aside in a dark area where it’s difficult to see the signers. Did you see the ASL performers on screen? Were you able to view the entire show in ASL on your TV screen? I didn’t think so. The ASL performers were put in the endzone, in the dark, where it isn’t easy to see the performance. The only way to see the ASL performance was through different programming that only a limited number of people knew about it and could access. How is that equitable communication access? Another case in point, it was not captioned for our deaf and hard-of-hearing viewers to make it worse. Captioning is another form of accommodation that millions of people rely on for accessibility. I’ve heard stories from hearing people who prefer to view closed captions during music performances. The captioning was not visible on the screen during most of the show, and it’s like listening to a concert without sound. 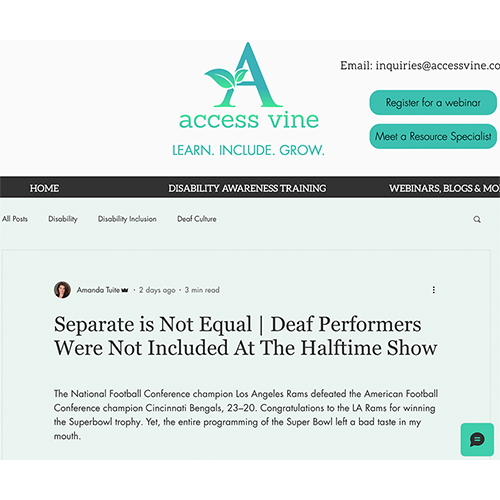