Federal and state disability laws require most businesses and government entities to provide effective communication for those of us with hearing loss. But the laws say very little about how to go about doing so, nor do they even try to define things like the line between effective and ineffective communication. As a result, our rights in many situations depend on what the courts say they are.

I’ve reported in the past about what the courts have done for or to us during the past year, so to keep the length of this piece somewhat manageable, I’ll link to those reports. Then I’ll look at what might lie ahead.

Deafness Reaches the Supreme Court — In November, the U.S. Supreme Court heard oral argument in the first case involving deafness: Cummings v. Premier Rehabilitation. A woman in Texas wanted to patronize a specific rehabilitation center, but the center refused to provide interpreters, leading to a lawsuit. The obligation was clear, and the violation flagrant. But the woman still lost because of holes in the federal law. Here’s a more detailed description of that case.

The question before the Supreme Court was whether the federal law requiring businesses that accept federal funds to be accessible allows plaintiffs to recover for emotional distress. The plaintiff and the Department of Justice argued that this type of damages has always been allowed in discrimination cases, and that the facility should have known it could happen. The business argued that because emotional distress is such an ill-defined concept, allowing those damages could subject businesses to ruinous awards. The plaintiffs responded that those ruinous judgments almost never happen, and that courts are well-equipped to adjust the size of any award that is totally out of line. (ALDA joined an amicus brief on the side of the plaintiff).

This issue is particularly important to people who might be injured or become sick while traveling. We’d hope that the hospital would provide interpreters, CART or some other method of communicating with us. What we don’t want is for the hospital to know that it could flatly refuse to do those things and completely get away with it. The money damages may not be all that significant, but the deterrent effect is critical.

We expect a Supreme Court decision sometime this Spring. I thought the oral argument went pretty well — it helps to have the federal government on your side. 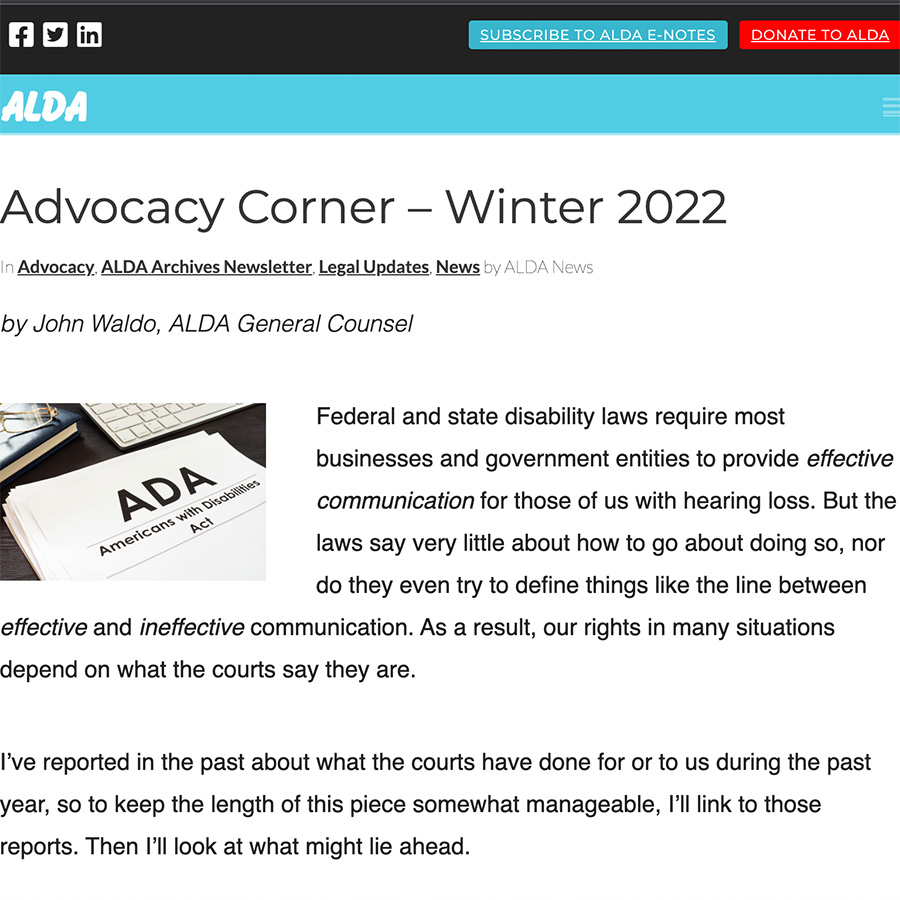 Learn to Sign with Your Baby by Cecilia S. Grugan | PenguinRandomHouse.com
Scroll to top