A bill which would make British Sign Language a legally recognised language has received government backing.

The proposed law, which passed its first hurdle in the Commons on Friday, would require public bodies to promote the language.

Actor Rose Ayling-Ellis has been one of those campaigning for the change.

The bill was put forward by Labour’s Rosie Cooper who said it would send “a clear message that they [the deaf community] deserve equal access”.

Announcing the government’s support for the legislation, Work and Pensions Minister Chloe Smith said it was a “significant step towards ensuring that deaf people are not excluded from reaching their full potential”.

During the Commons debate, Ms Cooper told MPs about her experience of growing up with deaf parents – including having to book a family holiday, on behalf of her parents, when she was only four years old. 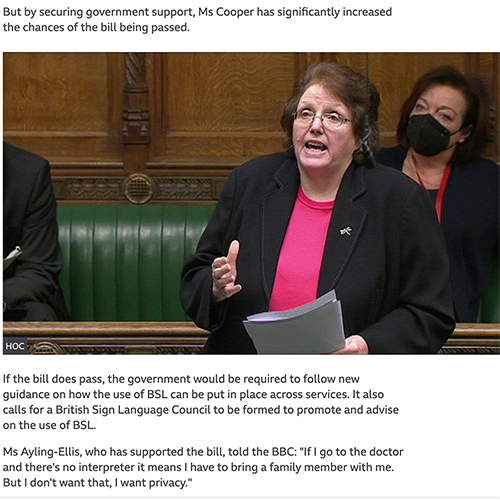 In ‘And Just Like That,’ Hearing Loss Is The Punchline Of The Joke…...

A World to Be Discovered: Deaf artists of Omaha | Gateway
Scroll to top