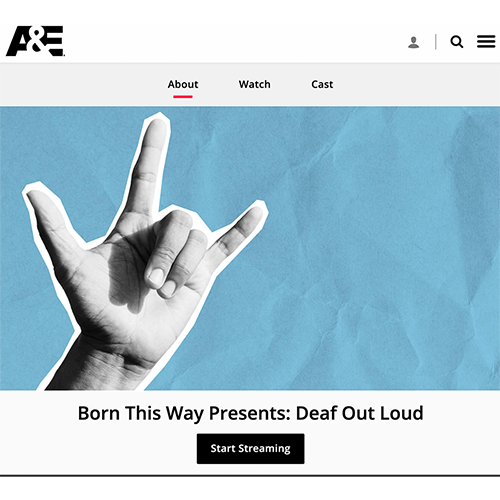 Produced by Academy Award-winner Marlee Matlin, “Deaf Out Loud” follows three deaf families. The film shows the differing opinions about how children who are deaf should be raised, and it addresses social stigmas faced by many people who are deaf.

The first family communicates entirely through ASL and are Deaf (capital D). Both parents were born deaf, one daughter was born deaf, and the other daughter is hearing. The father grew up speaking, and then learned more ASL at college and decided to turn his voice off. He says that communication problems with his family has led him to disassociate with some members. They voice concern that when hearing child enters kindergarten, she will lose some of her “deaf identity” and signing ability.

In the second family featured, all members are deaf. They sign, speak, and lip-read. My favorite character is Faith, a precocious little girl who is very cognizant of the challenges of communicating between the hearing and deaf worlds, and yet she has a very positive attitude. “Two different worlds,” Faith explains, “deaf world, hearing world. Yeah, there’s a lot of worlds inside….figuring out how to be deaf.”

When her mother, Rachel, says that she is nervous about a presentation that she is giving to hearing people, Faith advises her, “Just go with the flow. Pretend that you’re with your friends.”

Meanwhile, brother, Henry, who wears hearing aids, has been begging for a cochlear implant. The family considers this, but an MRI shows that Henry does not have the nerve necessary for a CI to be successful.

Father, Mick, has a cochlear implant but does not wear the receiver because he could not handle the stigma. He reports that hearing people would ask either ask him what it was or congratulate him on being “cured.” He stopped wearing an implant when a woman in the grocery store pointed to his implant and asked him, “What’s wrong with you?”

Mother Rachel feels criticized for not sending her children to a deaf school. Father Mick attributes much of his success to being in the mainstream setting. He says that overcoming those struggles allowed him to figure out ways to overcome communication barriers. As far as their relationship with the Deaf community, Rachel says, “We’re parents first, deaf people second.”

The documentary also follows a family of eight – two parents who are deaf, four children who are deaf, and two children who are hearing. This family has a lot of deaf pride, like the first family. “Deaf people can do a better job,” states the father. He never considered a CI. “This the way I was born,” the father says, “I don’t need a cochlear implant.”