“Audible” starts out looking like it is going to be a sports film about the football team at the Maryland School for the Deaf. But it turns out to be so much more.

Football games under the lights, a homecoming dance line with everybody moving in sync, high school pep rallies with lots of bass drums banging, a sweet moment of nighttime intimacy between two teens frightened about the future, and the pain that remains after suicide. It’s all there and then some in the Netflix short documentary, “Audible,” a sensitive, smart and touching look inside life at the Maryland School for the Deaf in Frederick.

As entertainment, it will remind some viewers of the NBC series “Friday Night Lights.” (Not so surprising given that Peter Berg, who was the creator of that series, is an executive producer.) As sociology, the film not only takes viewers inside the culture of the students, it offers audience members a chance to see the world through their eyes. That’s beyond the reach of even some very good documentaries that only show us other worlds from the outside looking in. Seeing through the eyes of members of a different culture is the lofty goal of ethnography, and “Audible” achieves it — in only 38 minutes running time.

Read more about the film: 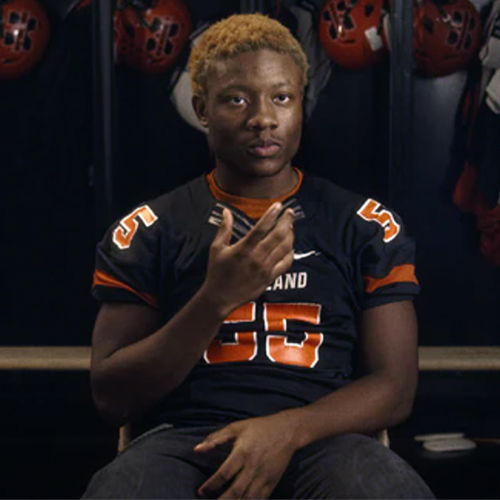 Amaree McKenstry-Hall in the Netflix documentary “Audible.” (Courtesy of Netflix)

A Deaf Man Who Couldn’t Hear Police Commands Was Tased And Spent 4 Months...

‘Deaf Talent’ trademark dispute leads to fears that deaf creatives may no...
Scroll to top