6 Medications That Could Be Damaging Your Ears | AARP

More than 600 drugs have been linked to hearing loss and tinnitus, including over-the-counter pain relievers

t’s normal to experience hearing loss and balance issues as you get older. But before you chalk up those problems to age, experts say you should consider whether a medication could be damaging your ears.

More than 600 medicines have been linked to hearing loss, ringing in the ear (tinnitus) or balance problems. The list of so-called “ototoxic” drugs includes both over-the-counter and prescription options. Among them: medications that treat heart problems, pain, infections and more.

In some cases, the hearing problems caused by a medication is reversible and will go away when you stop taking it, says Lawrence Lustig, an otolaryngologist at New York-Presbyterian/Columbia University Irving Medical Center.

But some drugs can cause permanent damage.

Older patients are especially vulnerable because their kidneys often aren’t as efficient at flushing out medications, putting them at higher risk of toxicity if a drug builds up in their system, Lustig says. Adults age 65-plus are also more likely to be taking more than one drug at a time and sometimes the combined effect of two medications can be worse than a drug on its own.

3 Ways to Protect Yourself

Ask about side effects. Ask your health care provider if hearing loss or tinnitus is a side effect of any of your prescriptions or over-the-counter medications.

Recognize early signs of trouble. Ringing or buzzing in your ears — or worsening tinnitus if you already have it — is often the first sign that a medication could be harming your hearing.

Opt for nondrug alternatives. Instead of reaching for a pain reliever for your bad back or bum knee, consider trying physical therapy, yoga or acupuncture.

Before starting a medicine classified as ototoxic, Lustig recommends getting a baseline hearing test and balance assessment, and then going for regular testing during treatment. That can help you and your doctor identify any hearing-related side effects early, since medicines often impact high frequency hearing first, so you might not notice the change without a hearing test.

Here are some common medications linked to hearing loss and what you need to know about this potentially life-altering side effect.

Because painkillers such as aspirin, acetaminophen (Tylenol) and nonsteroidal anti-inflammatory drugs (NSAIDs) like Advil and Motrin are widely available without a prescription, many patients take them regularly and assume that they are harmless. In fact, about 1 in 3 Americans takes a store-bought pain medication every day, according to a 2022 survey.

However, research indicates that over-the-counter pain relievers can contribute to both hearing loss and tinnitus, especially if they’re used for two or more days per week, says Sharon Curhan, an epidemiologist at Brigham and Women’s Hospital and Harvard Medical School and author of several studies on the connection.

In a 2012 study that followed more than 62,000 women, Curhan discovered that frequent use of acetaminophen or NSAIDs, even in typical doses, was linked to an up to 24 percent higher risk of developing hearing loss.  In men, a similar study demonstrated that regular use — two or more times per week — of acetaminophen, NSAIDs and aspirin are all associated with a higher risk of hearing loss.

Another large study, the Epidemiology of Hearing Loss Study, found that among adults who already had hearing loss, NSAID use was associated with a 45 percent higher risk of progression of their hearing loss.

Researchers speculate that the medications may reduce blood flow to the cochlea, an organ in the inner ear that helps with hearing.

“The overarching message from these findings is that even though these analgesics are widely available without a prescription, these are still medications and there are potential side effects,” Curhan says. “For anyone who is considering taking these types of medications regularly, it is advisable to consult with a health-care professional to discuss the risks and benefits and to explore whether there are alternatives to using medication.”

Fortunately, frequent use of low-dose aspirin (100 mg or less) has not been linked to hearing-related side effects. Many older adults take a low dose of the drug daily to prevent cardiovascular disease. 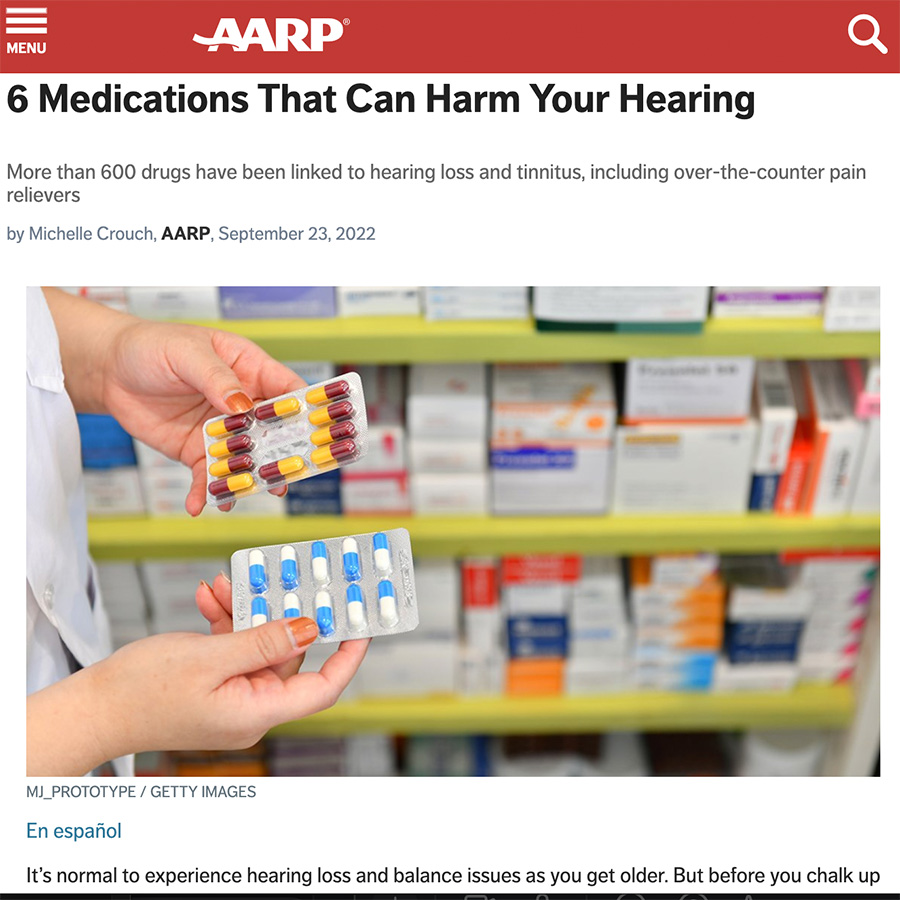 ‘We’re not just a deaf school’: The drumbeat behind Gallaudet’s...